A small sample of the wood and bronze Crests and Coat of Arms individually hand carved and then signed by Heraldic Sculptor Ian G Brennan which have been commissioned for private clients, corporations and the British Royal Household. 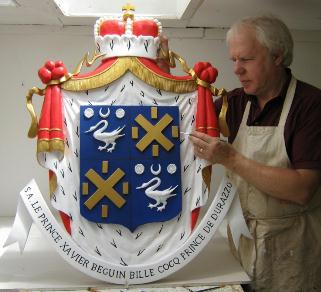 The origins of Heraldic Crests and Coat of Arms:

In the Middle Ages during the age of chivalry the crest and coat of arms were both practical and also served as a form of identification during Battle, pageants and tournaments, especially from a distance. In the confusion of battle the knight on horseback clad from head to toe in Armour with his Great War helm (helmet) covering his face, it was often difficult to distinguish between friend and foe and often in the confusion of battle their surcoats worn over their armour displaying their Arms were frequently torn off and subsequently it was then often only the crest placed upon their helm that would distinguish one Knight from another and if the Knight were dismounted these crests often came off, thus they became ‘crest fallen’.

Over the years identification of each individual Knight began to improve and records of the Knights Arms started to be kept during the Middle Ages by Heralds who set up the College of Arms in London Once the designs were registered they were painted onto the Knights shield and these symbols were also worked onto the light coloured surcoats worn over the Knights armour which protected the wearer from the elements; hence the term coat of arms. The Heralds original building was burnt down in the Great Fire of London in 1666 but it was rebuilt and the Heraldry record keeping of coats of arms for England, Wales, Northern Ireland and the Commonwealth continues today. 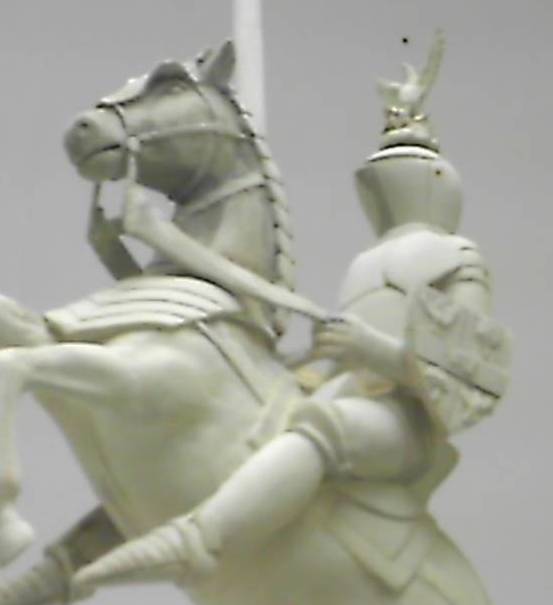 Heraldic sculptures are often seen as an exciting picture language using stunning images, vibrant design and visual colour, incorporating a glorious mêlée of signs and  symbols which are frequently chosen not only to reflect the life but also the career of the person concerned. Although Heraldry is viewed by many today as an ancient art form, its images are as strong today as they were in the Middle Ages. All over the world Heraldic Arts traditional striking designs of realistic and fanciful creatures are frequently borrowed and turned into successful corporate trademarks and modern logos.

Examples of carved Coats of Arms shown with Supporters:

A small example of some of the larger bas-relief carved coats of arms produced ‘with’ supporters painted or polished in a range of sizes and style from 18 to 36 inches high.

Examples of carved Coats of Arms shown without Supporters:

Examples of both wood and bronze Coats of Arms:

The original wood carving of the Arms with a replica cast in bronze along with on this example the clients carved Crest – painted wooden and bronze Arms  – carved wooden Arms and smaller bronze replica.

Information about the Artist:

Ian G Brennan has been a professional artist, woodcarver and heraldic sculptor for thirty years and has been commissioned to create many carved coat of arms and crests not only for the College of Arms in London during the past twenty five years but also for both private and corporate clients and also for Nobility and Royalty from all over the World. In 1989 Ian was officially appointed the Sculptor to the Most Noble Order of the Garter and the Most Honourable Order of the Bath and since that time spends an average of five months of each year on a wide variety of commissions in both wood and bronze for the British Royal Household.

The Heraldic commissions from the Royal Household include carving, painted and gilded all the royal crowns, coronets and knights crests for the Royal Knights, Ladies and Knights of the Most Noble Order of the Garter and Knights of the Most Honourable Order of the Bath, two of the highest and oldest Orders of Chivalry in the World with many of these commissions then being placed on display in Henry V11 Lady Chapel in Westminster Abbey and in St George’s Chapel in Windsor Castle.

Ian’s who’s commissions for the British Royal Family and also overseas Royal families have included creating the Royal crests for HM The Queen’s son’s Prince Andrew; The Duke of York and Prince Edward; The Earl of Wessex along with producing the Royal coronet for HM The Queen's daughter HRH Princess Anne; The Princess Royal and more recently Ian was commissioned to produce the Royal crest and sword for the Queen’s grandson HRH Prince William; The Duke of Cambridge.

These three similar carved and gilded royal crests shown below were for the most recent Royal Knights to be awarded one of the world’s highest and oldest Order of Chivalry; the Most Noble Order of the Garter. These almost identical crests along with the princess’s coronet recognises their seniority within the Royal family joining their mother, The Sovereign; HM Queen Elizabeth II, father Prince Philip; The Duke of Edinburgh, brother Prince Charles; The Prince of Wales and sister Princess Ann; The Princess Royal. 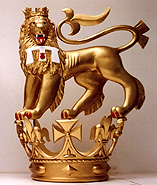 HRH Prince William’s; The Duke of Cambridge’s Royal Crest and Sword being worked on in his studio now on display upon the Prince’s helmet in St George’s Chapel Windsor Castle.

Typical Timbers used to carve Crests and Coats of Arms:

The timbers used to carve the Coat of Arms are mostly lime wood and occasionally mahogany, teak and oak.

The Lime tree which alternate names are Basswood and also known as a Linden tree in the USA.  The lime tree produces a clear tall trunk and is a stately tree which grows in the deciduous forests of Europe, the British Isles, and the USA. It is the tallest broad-leaved tree in Britain. The 'common lime' can live up to 500 years and 'Avenues of lime trees are often found growing alongside the roadsides particularly in the UK. They were originally planted to provide shade in the summer and help prevent snowdrifts in the winter months.

A typical avenue of lime trees

Lime wood timber when seasoned is white to pale yellow and has a smooth, uniform texture with a soft close grain. It is a light wood with no distinction between sapwood and heartwood. It is strong, stable and resistance to splitting and worm damage. It is an excellent wood for making electric guitar bodies and model building and also for the excellent detail which can be obtained in intricate carving. Lime wood also glues well and polishes to a good natural or stained finish.

The Typical various stages of carving a Coat of Arms both with and without supporters: 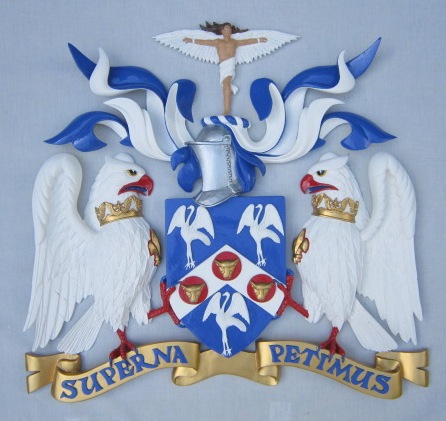 Suitable pieces of selected seasoned timber usually lime wood or mahogany is prepared and when appropriate the separate board are glued together. The outline of the basic design of the Coat of Arms is then lightly sketched upon the face of the timber and using a jigsaw or band saw the outline of the Arms is then produced which is then allowed to settle in room temperature for several weeks before the actual carving process begins.

The boards are sanded smooth to enable any imperfections in a particular piece of timber that might be found, to be replaced. Over the coming weeks the high point of the carving are left untouched with the remainder being carefully carving away with various carving chisels to the desired depth. Once all the fine detail of the carving has been completed the coat of arms is then sanded smooth and prepared for finishing.

Usually at this stage a photograph of the completed carving is sent to the client via email for approval and once the client is happy with the carving so far a small metal plate for hanging purposes is screwed onto the back.

The carving is then carefully sanding down once again and several coats of a wood sealant and then wax polish is applied. If the Arms are to be painted the sealant and polish is replaced with several coats of either enamel or acrylic paint. Once all the finish has been applied photographs are again email to the client for final approval. Once approval for the completed Arms has been received they are ready for packing and shipping.

Carving a Coat of Arms - without supporters:-

The same process for producing a Coat of Arms without supporters shown above is applied to the Arms shown below which was carved from Teak.

It is also possible to produce a bas-relief casting of the clients coat of arms cast in marble or stone resin mixture which can then also be painted. Firstly the original drawing of the design would be carved in bas-relief directly various materials including clay, plaster or wood and once completed this original 'master copy' can then be replicated by producing a rubber and plaster mould using this original carving which could then be cast in stone or marble resin which is both strong and durable which can then be painted in the appropriate colours.

Alternatively from this mould a wax version can also be cast from which a bronze can be produced in the art foundry. If the original carving was carved from wooden this original woodcarving ‘master copy’ can then retained and painted or stained and polished. Once the original mould has been made it is then possible to make several replicas.

The process in producing a bronze (hot metal) version is shown further down the page in ‘Casting a bronze shield.

For further details and stage photographs showing how both these Cunard bas relief sculptures were produced; please click appropriate photographs.

Further example using marble/resin which is then painted using a quality gilt varnish.

Carving a Crest from wood

Once the most suitable pieces of timber had been selected from the stack of timber which has been seasoning for several years the drawing of the crests is scaled up accordingly and a simple outline paper version produced. This paper outline can then be simply moved around the block of wood to find the most suitable part of the timber from which to produce the carving itself; in this example a Beaver crest.

A copy of the original coloured design obtained by the client which Ian works from and a selection of seasoning lime wood timber.

Once the white wood primer paint has been added and then allowed to dry, the carving is again finely sanded down before the first coat of the finishing paint is then applied. In this particular crest several coats of 'enamel' paint, usually Humbrol is used which is then rubbed down smooth between coats. Once the final coat of enamel paint has been applied and the paint allowed to harden for a few days before the whole crest is ready to be lightly polished with 0000 wire wool dipped in wax polish.

The Crest for the mountaineer Sir Edmund Hillary commissioned for St George’s Chapel in Windsor Castle.

A small selection of the forty three Knights of the Garter Crowns, Coronets and Crests carved by Ian G Brennan, including the Crest for Sir Edmund Hillary placed upon the Knights Helmets in St George's Chapel in Windsor Castle.

Each of these Royal Crown, Coronet or Crest usually takes Ian between two and eight weeks to produce and are mostly carved from lime wood which Ian then paints and gilds and the sizes range from between 12 - 28 inches high. The Royal Crowns and Coronets are carved with gilded rims set with carved and gilded jewels, or when appropriate for Sovereigns the jewels are coloured. The golden arches Ian makes for many of the different Sovereigns Crowns are fitted with rows of large white or silver carved wooden ‘pearls’ which are placed above either open Crowns or above a carved crimson caps.

HRH The Princess Royal and HRH The Duke of Gloucester's Coronet and Crest carved by Ian in St George's Chapel Windsor Castle, placed alongside HRH The Duke of Edinburgh and HM Queen Elizabeth II carved Crests.