A sample of commissioned carved and painted Coats of Arms and Crests in both high bas-relief and three dimensions during the past three plus decades, all created in a variety of materials ranging from wood, hot metal bronze and both solid marble and bronze resin castings. The bas relief Arms have ranged in size from 6 inches to over 60 inches high.

Ian’s Coat of Arms bas-relief carvings in such a way as to enable the Arms to be viewed from different angles, not just the front. The detail upon the shield is also raised up upon the shield and carved in bas-relief, not just painted upon the shield. Not only for effect but also if required enables a mold to be taken from the original carving and castings made in a variety of different painted or unpainted casting materials.

As these particular Knights and Royal Crests over the centuries have been produced to be viewed from below from the side and front in both St George's Chapel and Henry V11's Chapel, so it has not been deemed necessary to carve them on the back, however Ian decided over thirty years ago from day one he would be creating all these Crowns and Crest for the Royal Household in full three dimensions.

A centuries old restored Knight of the Bath Crest once placed in Henry V11 Chapel in Westminster Abbey  and a typical Crest of a Swan carved by Ian along with the Royal Crest carved for King Edward V11 for St George's Chapel Windsor by Ian's predecessors during the last century, which Ian recently restored.

Although Ian’s prefers not to get involved to much with restoration projects as he much prefers to create his own work however now and again he has restored a number of often historic objects over the years although he tries not to restore things to ‘within an inch of the life ‘so to speak, but to keep as much as possible the 'spirit of the original work and materials the artist spent many an hour creating all those years ago.

Various commissions shown here in Ian’s studio during 2019 destined for the private home and both Westminster Abbey and Windsor Castle, having been roughed out ready for the fine carving and finishing, most of which were completed and delivered by the end of that year.

Ian’s ‘private’ commissions along with his commissions from the ‘Royal Household’ are often being worked on alongside each other with many wood carvings having been carved from within the same massive lime tree seasoning inside his workshop being brought up to room temperature. So, over the year’s commissions for many carved Coats of Arms and Crests for both private client’s and the Royal Household have often grown up together within the same tree.

Shown above; a small selection of the 130 Crowns, Coronets and Crests created by Ian that have been placed on display during the past thirty plus years in  Henry V11 Chapel in Westminster Abbey – Ian carving the Crest for Sir Edmund Hillary and the Crest having been painted placed in St George’s Chapel Windsor alongside many of his other Crowns and Crests.

A selection of commissioned Coats of Arms and Crests in a variety of sizes, materials and different venues including from the starboard side entrance port on Lord Nelson’s 18th century Flagship HMS Victory to the somewhat for modern Ship with a pair of Crest placed in the Grand Lobby of Cunard’s Queen Victoria. 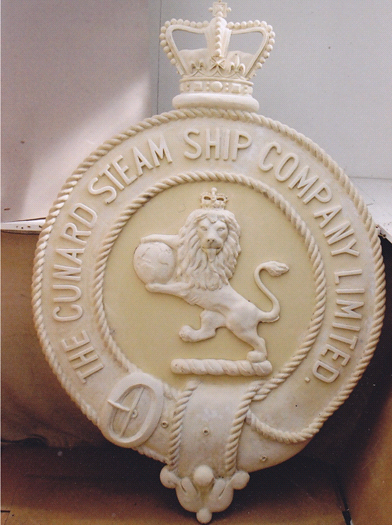 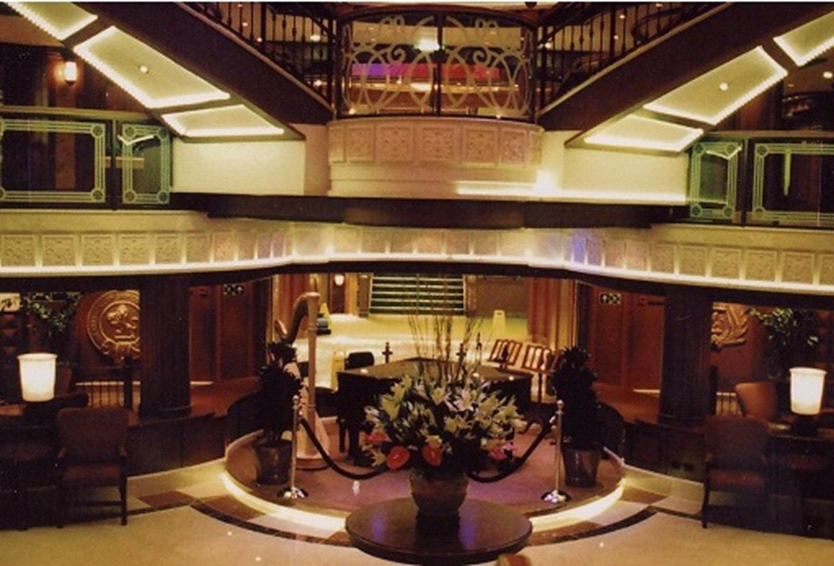 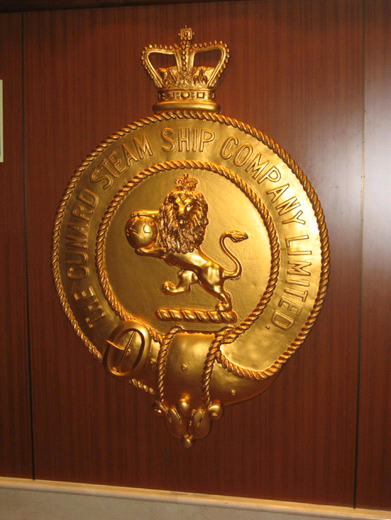 A selection of various carved Arms and Crests in Ian’s Studio during various stages being created in both base-relief and three dimensions. Crested from the original drawings supplied by the clients which are then enlarged to the size required from the client.

Two typical client’s original designs that Ian works from along with the completed Arms, Crests and heraldic sculptures

Once the Arms have been carved if requested at the time a plaster and flexible rubber mold could then be produced which doesn’t damage the original carving and replicas cast in a variety of different materials could then be produced, such as bronze and marble resin castings along with ‘hot metal’ bronze casting.

Clients have also requested a large carved Crest of his Arms carved in three dimensions along with the painted original woodcarving and a bronze casting. 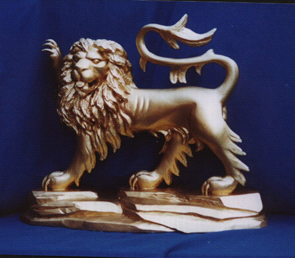 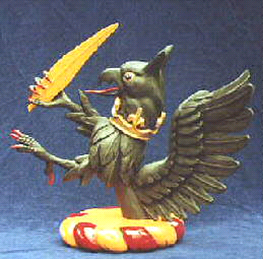 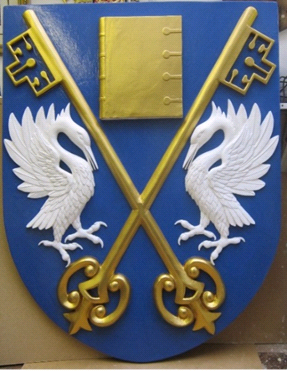 The various stages of creating a client’s Coat of Arms from the ‘tree’ (the seasoned lime wood boards) to completing the Arms in two different sizes and timbers 9lime wood and oak), molding and casting in marble/resin and preparing for a hot metal bronze casting.

Once the Arms were carved the surface was prepared and two coats of wood primer added. Seveal coats of of enamel paint and gilt varnish is then added.

A similar slightly smaller version of the Arms, shown below were then commissioned to be carved from solid English oak which was then polished.  Prior to polishing the oak carving was molded and a casting produced in wax for a potential slid bronze casting and a version was cast in the finest white marble and resin.

Creating a Royal Unicorn from lime wood and casting in bronze

Similar process as the Arms is undertaken to create a heraldic sculpture in both wood and bronze.